A Question of Title

Many times I have been asked about how many years we search back in the public records when we are searching title to a piece of property. Typically in Alabama, we search the title back at least sixty years unless, we have a starter file or existing title policy that we can rely upon. Often times, we will have to search back much further, sometimes all the way back to the original government grant (Patent), in order to develop a satisfactory chain of title.

I was asked thi 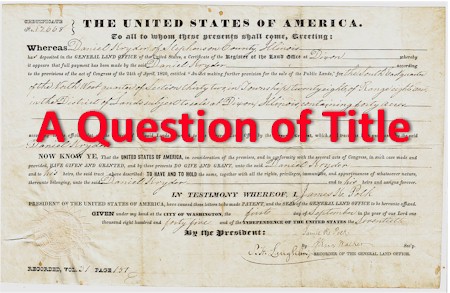 s question again the other day and it got me to thinking about an old article that I had from many years ago about an Attorney performing a title search for the FHA and trying satisfy their requirements and the hilarious response he wrote back. I did some digging and found the article which I have shared below. There was no author attributed to it so I don’t know who to give the credit to, however, if I can locate the name of the original author, I will post it.

The article follows below, enjoy!

A Question of Title

A New Orleans lawyer sought an FHA loan for a client. He was told the loan would be granted if he could prove satisfactory title to a parcel of property being offered as collateral. The title to the property dated back to 1803, which took the lawyer three months to track down. After sending the information to the FHA, he received the following reply:

“Upon review of your letter adjoining your client’s loan application, we note that the request is supported by an Abstract of Title. While we compliment the able manner in which you have prepared and presented the application, we must point out that you have only cleared title to the proposed collateral property back to 1803.

Before final approval can be accorded, it will be necessary to clear the title back to its origin.”

Annoyed, the lawyer responded as follows:

“Your letter, regarding title in Case No.189156, has been received.

I note that you wish to have title extended further than the 194 years covered by the present application. I was unaware that any educated person in this country, particularly those working in the property area, would not know that Louisiana was purchased, by the U.S., from France in 1803, the year of origin identified in our application.

For the edification of uninformed FHA bureaucrats, the title to the land prior to U.S. ownership was obtained from France, which had acquired it by Right of Conquest from Spain.

The land came into the possession of Spain by Right of Discovery made in the year 1492 by a sea captain named Christopher Columbus, who had been granted the privilege of seeking a new route to India by the Spanish monarch, Isabella. The good queen, Isabella, being a pious woman and almost as careful about titles as the FHA, took the precaution of securing the blessing of the Pope before she sold her jewels to finance Columbus’ expedition.

Now the Pope, as I’m sure you may know, is the emissary of Jesus Christ, the Son of God, and God, it is commonly accepted, created this world.

Therefore, I believe it is safe to presume that God also made that part of the world called Louisiana. God, therefore, would be the owner of origin and His origins date back, to before the beginning of time, the world as we know it AND the FHA. I hope you find God’s original claim to be satisfactory. Now, may we have our loan?”

The loan was approved.

I still get a laugh every time I read this letter even after all of these years! In fact, I have a copy of it framed and hanging up in my office.

John A. Baggett is the President and CEO of Statewide Title Services, Inc., a full service title agency located in Birmingham, Alabama. Statewide Title provides title insurance and real estate closings for the Birmingham Metro Area as well as across the State of Alabama.